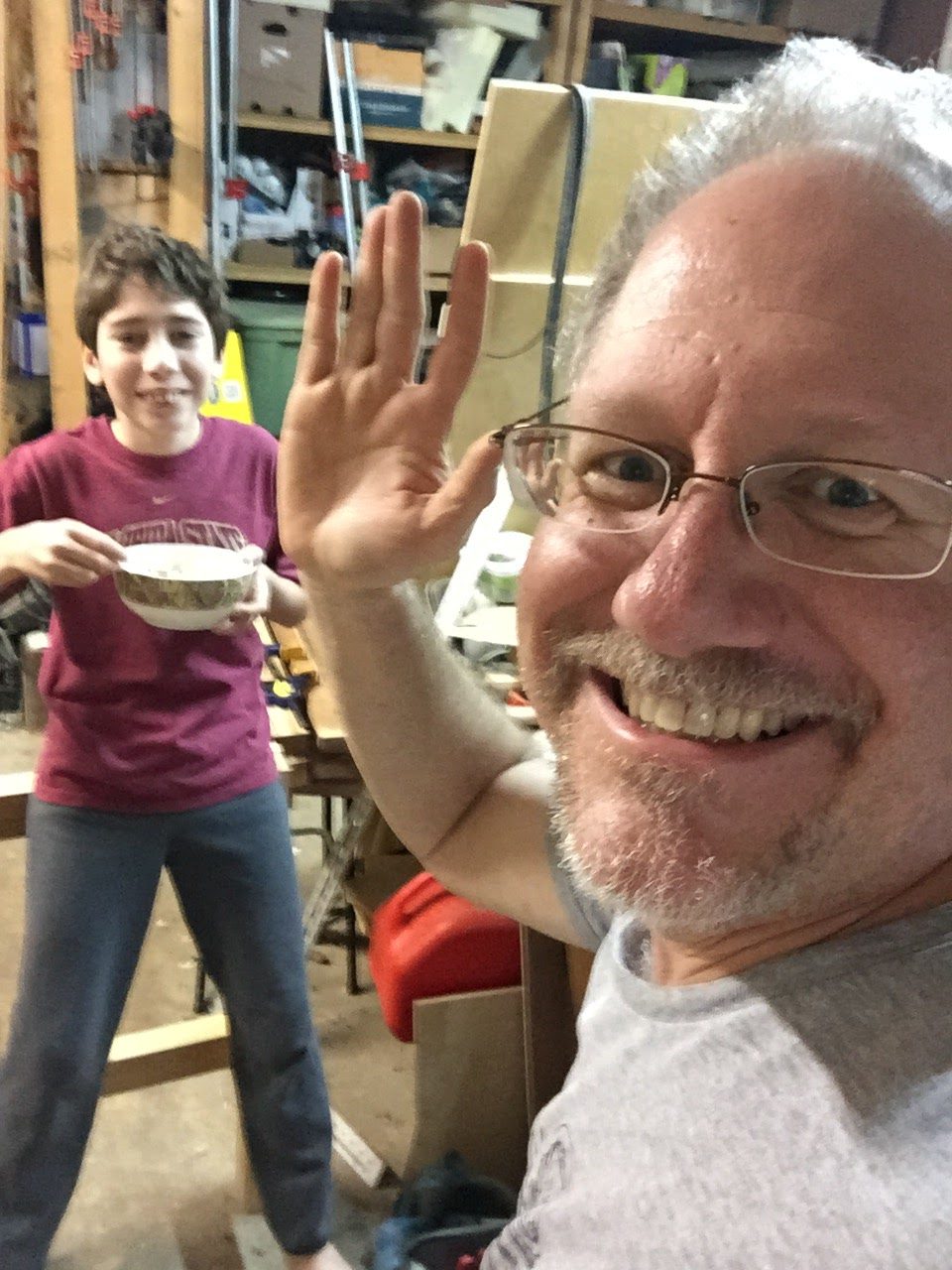 Rosh Hashanah just passed us. The cycle of the new year begins again for Jews around the world and part of this includes reading The Akeda, the binding of Isaac, Abraham’s favorite son, born of his wife Sarah. I have published a version of this post for the past few years, since my son’s diagnosis.

It struck me initially, seemingly from nowhere. The past few years, nearly the only thing on my mind was the health of my only child. My son, Avner has a very rare, devastating neurological illness called Kleine Levin Syndrome (KLS). KLS is a form of idiopathic hypersomnia. That means that people with KLS, sleep a lot. Some of them sleep for days at a time.

When they are not asleep, but “in an episode” their waking moments are marked by mood changes, memory deficits, and many strange behaviors. Parents like myself, flock to the online support group and frequently rant when our children are gone again. We hope it will not be for long and that this episode might be the last one.

Often this disease takes years to be properly diagnosed. Patients frequently collect incorrect diagnoses of severe mental illnesses until a doctor or a desperate parent finds the KLS diagnosis and the search begins to find a qualified medical team that can test and evaluate the patient for KLS. I say parent, because the mean age for the onset of KLS is 16 years old, but my son had his first episode at 12. Some aren’t diagnosed or experience symptoms until well into adulthood. I hope this memoir project of mine helps to put more information in the hands of those desperate parents.

My son’s prognosis is tentatively good. He responds well to a course of medical treatment. Only 30% to 40% of patients see relief from lithium. No other drug currently performs as well. We tried a second medication which is custom compounded for hypersomnia patients, as an off-label prescription. Avner, for his own reasons, has chosen to stop that medication.

I tell our tale frequently. I tell it too frequently. As a parent of a healthy child, until this disease, I was ill prepared for such a radical change in lifestyle and perspective. Parenting presents difficult challenges and we all struggle at times, but without much doubt, my wife, Barbara and I have struggled more than many because of the great uncertainty created by KLS. Even now, we do not know if our child will wake tomorrow or if we will return to the painful cycle we lived before the medication seemed to be working.

Someone who heard me tell the tale too much, told me so and suggested it’s time to move forward again. It woke me up and made me more self aware, which is certainly a theme of Rosh Hashanah.

After sleeping on it, a little like Jacob, wrestling his own angel, I had my own insight. We all read biblical stories through the lenses of our own experiences. The Binding of Isaac certainly invites such opportunities.

My friend David turned to me one year during holiday services and said to me “Isaac was an idiot.” We ducked out of services so he could grab a quick bite and he laid before me his literary criticism of Isaac and made a compelling case for some kind of developmental deficit. It fascinated me and probably established my deep interest in this passage as an insight into late Stone Age or early Bronze Age cultures.

In our sanitized modern culture, the story still horrifies us. No doubt, some kids must still come home from holiday services wondering if their parents are going to tie them down and offer them up as a holy sacrifice. Post Holocaust, a common criticism of Abraham is that he failed G-d’s test because he famously argued for the innocent of Sodom and Gomorrah, but not once for the life of his own son.

Now I’ve gained yet another perspective on the tale. We read this story from different key perspectives throughout our lives. Upon our introduction to the story, usually at a young age, we see the story as Abraham’s servants saw it play out before them. They brought the wood and their master and Isaac. They saw the plot played out before them with keen interest but without personal investment. On those initial readings, we learn the sequence of events and we know that it pieces together an important story.

We become familiar with this story and we try on the role of Isaac. At first we wonder at the journey and we put our trust into Abraham, when he tells us that G-d will provide the ram. We experience the fear of the raised knife. Like young adults, we may feel indignity at being the passive object of everyone else’s designs. Where is Abraham’s chutzpah, willing to raise his objection to his G-d in the name of the unverified good souls in Sodom and Gomorrah, arguing with his deity almost to the last innocent soul, but not for his own flesh?

Perhaps, like my friend David, you seek an explanation or a justification by way of some defect in Isaac. Was he a simpleton, unable to speak intelligently for himself? The narrative makes quite the point of the simple childlike questions that Isaac ask. By contrast, the chronology of the story tells us that Isaac is a grown man by this time. Could this have been a Stone-age rite, to rid the tribe of members who could not contribute? Could the importance of the tale be that Abraham broke the tradition to give us a new modern morality? Did Abraham pass the holy test by sparing his son or following the command of his deity? Did he fail for following an immoral order without question? These questions have long been debated between Jewish scholars.

Yet there is another reading. Parents who enjoyed the growth of healthy children and may now struggle with their own infirmities find themselves caring for an ailing child, know this reading. Abraham has grown old in the service of his Lord. He profited and grew his wealth and that of his people. All went well for this servant of G-d. Abraham has G-d’s ear and great influence in his known world. Then his life which moved from strength to strength changes course abruptly.

My own child was strong, energetic and brilliant with an insatiable curiosity. We used to run together when I trained for triathlons. Then he disappeared inside himself for more than two years and we lived with a walking husk of the child we once knew.

It occured to me, that maybe we have been reading this story of the binding of Isaac all wrong. It’s not a test of Abraham’s will, or devotion or even his ultimate morality. It’s not a test at all. Through Abraham’s eyes it’s a journey of the father who faces an impossible task regarding a child he loves. Abraham has no choice in the matter. His only option is to move forward through the horror ahead.

In the next part of Abraham’s tale, he loses his wife. He does not speak directly to G-d again, as far as we know. He seems broken by the experience as far as we can see. His demise follows closely enough, and the great wealth and the land holdings he gathered will not pass to the next generation. Isaac was a dweller of tents, we are told. He was a nomad without substantial land holdings.

It doesn’t make for a tidy reading. There’s no tightly knit resolution, except to say that everyone continued to live their lives and that struggle would ensue.

Those of us who have watched a healthy child fade before our eyes, walk in similar paths. We watch the graduation announcements and the triumphant first day of school photos in social media. Instead, we learn to celebrate when our child is well enough to continue school, or the school is willing to amend accommodations that help our child stay enrolled, if we are very lucky. Maybe we are blessed to have our child mentally present for weeks or months.

We are ascending the mountain, because we must. We have the blade in our hands. Our beautiful children walk beside us, struggling under the load of the wood they bear to the alter. We are both hoping and praying that this will work out in some other way than what it seems. We continue through the day. Then we gather our loads, and we do it again.

The original draft of this post was written and published two or three years ago. It gets updated a little, each time I share it but I feel that the changes of the past year call for this separate addendum.

Under our advice, and with our help, Avner withdrew from school, soon after his 16th birthday. We were advised by many, both in favor and against this choice. Avner never completed a full academic year beyond middle school. Technically, his standing as a sophomore in high school, owed more to his advanced classes through 8th grade than any work completed after.

He missed a lot of first days of schools. He missed every end of year gathering with friends.

Avner graduated with his GED in December of 2019. He started as a freshman at our local community college in January, three months before he turned 17 with a very reduced load. Last month, Avner posed for the first “first day of school” photo in a three years. He still struggles with Kleine Levin Syndrome and the effects of his medication, which is why I am writing this memoir.

May all my readers be blessed this coming year with more good health for themselves and their families.