Looking for a Needle in a Stack of Needles

Home Diagnosis Looking for a Needle in a Stack of Needles 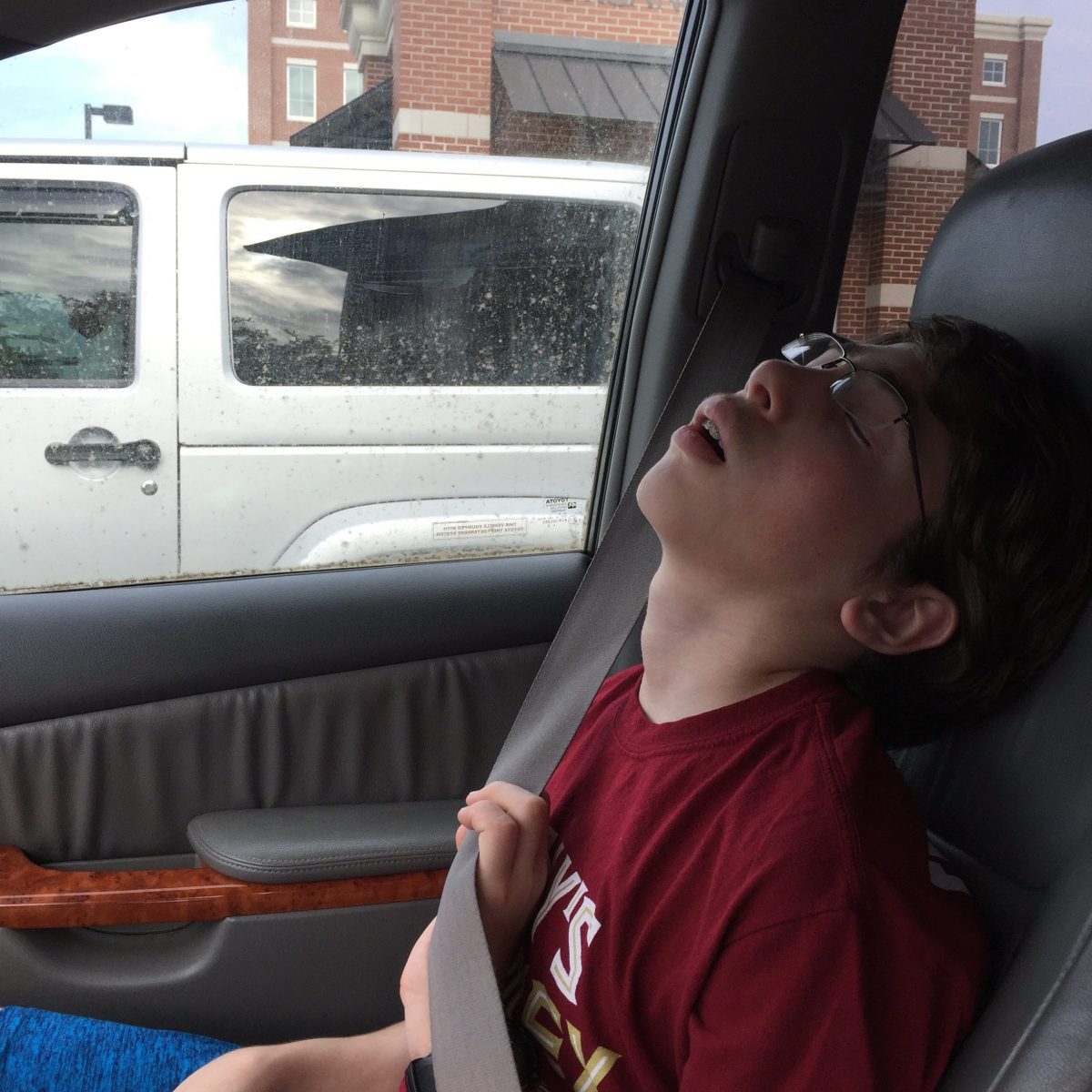 In December of 2016, I counted down the days until my cataract surgery. I posted pictures of myself with the days until I could ditch my thick prescription glasses and I could hopefully see again.

Since the age of 8, I saw my world from behind the portable windows of prescription lenses. To enjoy water sports, I simply went forward, fairly blind. At least I managed to stay in my lane. One other swimmer, before goggles were common, swam with his eyes closed and never finished in the same lane he started from.

I found relatively inexpensive corrective lenses for snorkeling and lap swimming only after I became a parent. In my first triathlon, they provided a table for prescription glasses near the swim exit. After that, I either ran in my goggles with my world looking like I was driving without windshield wipers, or settled for a hazy blur as I found my way to my bicycle. The three inch high numbers on the bike tag were just big enough when I found my row of bikes.

At the age of 51, I became a veteran of eye surgeries and what used to scare me to my bones, almost felt routine after losing my vision twice and being cured by removing much of the contents of each eye, then having them reinflated with saline. Cataract surgery no longer scared me. As a graphic designer dependent on my sense of color, I had fretted about the color shift of having the haze lifted from my eyes. By the end of 2016, I had no more reservations. I simply could not see well enough to function or care.

My mother in law’s birthday fell on Christmas Day and we planned to visit with my in-laws in Milwaukee. So, it we decided that I would have my eye surgeries before our road trip, and to take full advantage of our insurance situation. I had exceeded our out of pocket expenses with the two previous vitrectomies, and my cataract surgeries were mostly paid for. We only needed to pay the difference between the new corrective lenses and the standard lenses for implantation. For safety sake, the surgeries were scheduled a week apart. A contact lens was ordered for my left eye during the week between.

The sign outside Palmer Eye Center that my doctor used for surgery, looks more at home in front of a Las Vegas casino than a surgical suite, but I guess that works for those who need a clear landmark. Inside, the building looks much less ostentatious. A white wall with a window for patients to check-in is the most obvious feature. The seating is relatively modern unremarkable and utilitarian office fare, comfortable enough for the brief wait before being usher back to the prep room. The nurse verified all the pre-op information while I was in the pre/post operative area and I was wheeled back, asleep as I recall. I woke staring into a bright light. Something happened by way of procedure and I was wheeled back. There was a little conversation and some music for the doctor’s benefit. It felt entirely uneventful.

It wasn’t until we were eating dinner, about 5 hours after the surgery that I took off my glasses and gazed past my wife, Barbara to the bookshelf behind her. I was reading the spines of the cookbooks! I could actually see across the room. It was probably the last time I wore my thick glasses. As planned, I placed the contact lens in my left eye, and I could see.

At the post-op appointment, they checked my vision and I had settled into a place between 20/20 and 20/30. After a lifetime unable to see the “Big E” on the eye chart, I was thrilled. I tried to remove the contact myself a couple times, but failed. I left it for the surgeon to remove as he had suggested. The left eye wasn’t as clear when that surgery was done, but I have managed to pass my drivers license exams without corrective lenses ever since. It’s a huge change in my life to be able to see. Silly as it may seem, the biggest thrill is wearing regular sunglasses and safety glasses. I can spend as much or as little as I want and walk out of a store with them at that moment if I want. I no longer need to wait a week or two for my lenses to be ground to my prescription.

On December 9th, Avner participated in the Lincoln High School holiday concert. He sings bass. It was his last performance. Kimi sang in the women’s section. Being the big high school holiday concert, the choruses were joined by the school orchestra and band. It was a cacophonous event organized around a winter holiday theme. The band made their entrance up the aisles for dramatic effect and we were seated too close for my own comfort, but at least I could see my kid in the chorus.

Avner and Kimi both sing beautifully and like most parents, we endured the elementary school performances. We really started to enjoy the concerts starting in middle school as their voices matured and chorus membership became more selective.

I’ve had the pleasure of listening to them just play off of each other’s voices several times. On one occasion, Kimi joined us for a camping and fishing trip in Panama City. The Troop camped at St Andrews State Park and we fished for the day. We ended that day with a freshly caught fish fry and campfire. On the way to the campsite, I was serenaded with a range of music from popular to choral pieces they were working on. It made the road trip pass quicker and we had lots of opportunity to laugh as they played off different styles as teens with talent will do. The winter concert would be Avner’s last. Though he still enjoys singing, he is unable to maintain a schedule that would allow him to join any of the community choruses.

Among the other troubling behaviors Avner exhibited, he would sometimes drop off to sleep while on the way to school. He would fall asleep against Barbara in restaurtants or in the car after dinner. Sometimes it would be a struggle to wake him to go home or come inside our home. He would usually wake within the hour and come in through the open garage door. He would become non-verbal, mostly grunting and combative about being dropped at school. There were times, I am ashamed to admit that I felt rushed and physically removed him from the car and told him to go to class.

On one occasion, he curled up in the footwell of the passenger seat so I could not get him out of the car. When I returned home with him, He remained in the car and I left him there and went into my home office. Barbara found him sprawled out in the hatch area of the car and tried to get him into the house. He crouched next to the car, non-verbal and unwilling to go into the house for some time. He acted almost like an animal stuck in a person’s body. It was a pattern that was becoming more regular.

The last 9 weeks of the fall term mercifully ended. Barbara and I put the last pieces in place, so we could hit the road visit my inlaws. It was around this time that Barbara and I were sitting in the living room watching tv and I was distracted by what became my new hobby, searching the internet for sleep disorders. I already raised the possibility of a sleep related problem with our family therapist, Dr Schmidt, who suggested we eliminate the possibility before proceeding with more behavioral or psychiatric intervention.

At that time in late 2016/early 2017 I kept finding narcolepsy articles that failed to completely fit what we saw. In retrospect, narcolepsy would have been a good place to start. On this one particular night, I finally stumbled on something new, a Wikipedia entry for Kleine Levin Syndrome. The article transfixed me. As I read through the entry, I could not avoid feeling as if it was both the strangest thing I read about sleep disorders while also feeling that we had seen every symptom it described. It intrigued me even more that behaviors we saw but not considered before that moment were listed and explained as symptoms.

In black and white, I read the definition of a disorder characterized by episodic hypersomnia with sleep up to 20 hours a day, hypersexuality, changes in personality, appetite, difficulty with body temperature, and loss of memory. The article indicated a higher prevalence among Jewish patients. The mean age of onset was about 16 years and boys were diagnosed twice as often as girls.

I turned to Barbara and said something like, “this is the weirdest thing I just found, but I think we’ve seen every symptom. In my excitement, I probably pushed my phone at her, urging her to read what I had found. She reluctantly took my phone, after I had interrupted the show that actually had her attention and she read the article. “That’s weird alright” I got back as a response.

That’s how I got to the next dilemma. The article spoke of the difficulty of getting the diagnosis. It said that most patients spent years with the wrong diagnosis and that it was diagnosed by exclusion. None of this was immediately promising. I searched a little more, but there was very little information available. There was a KLS Foundation website, which hadn’t been updated for a while and a page on the sleep disorder/narcolepsy site for Stanford University. I needed to figure out how to look into this.