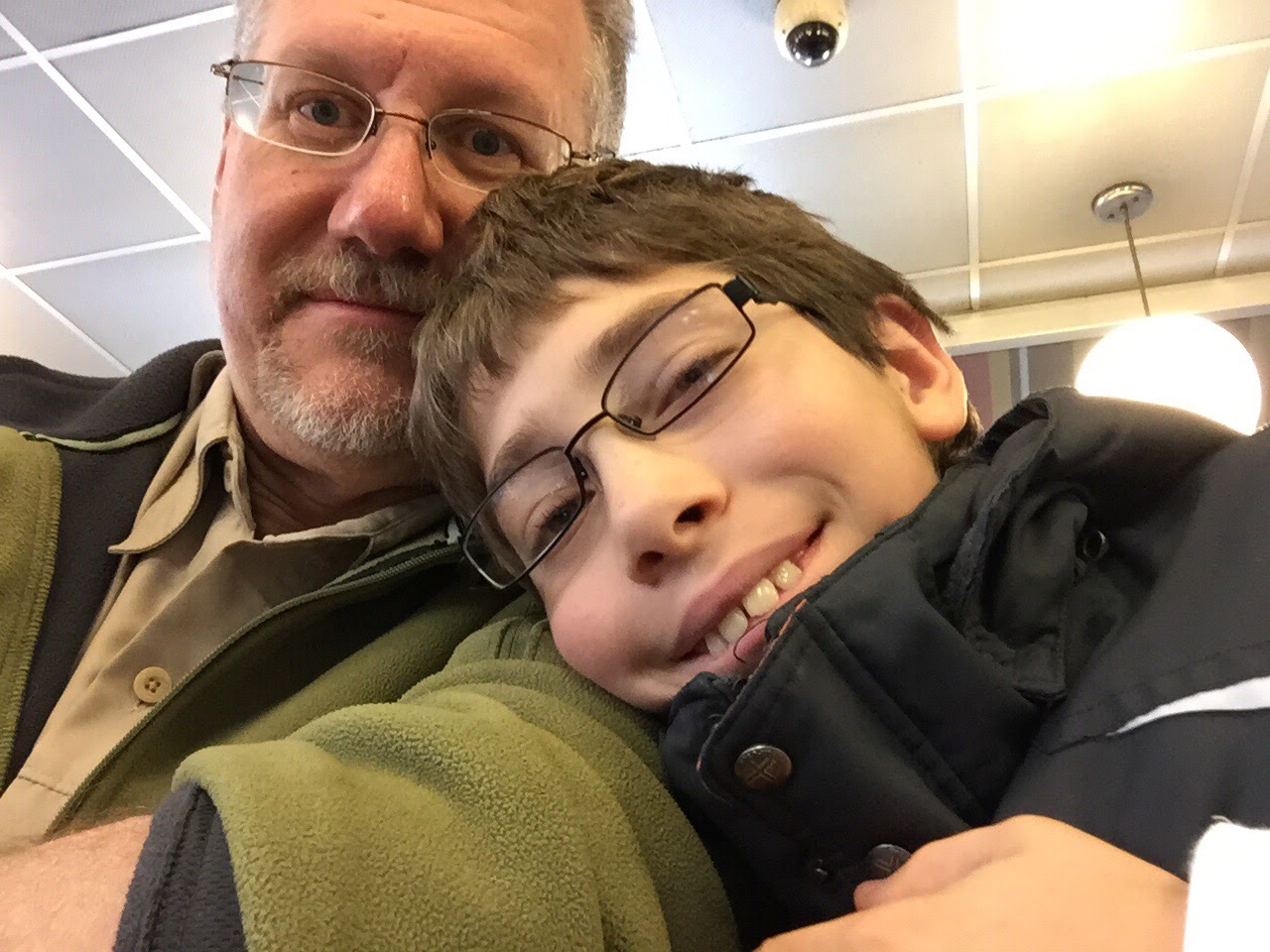 Avner faced a number of challenges in school. By the time that we finally secured his individualized education plan, more commonly known as an IEP, he was in third grade. Avner received a diagnosis of Attention Deficit Hyperactivity Disorder (ADHD) and Asperger’s Syndrome, now classified under the larger umbrella of Autism Spectrum Disorder (ASD). He was classified as twice exceptional, meaning that he also tests with a gifted IQ.

Some people argue ADHD belongs to the larger autism spectrum by itself. A diagnosis of ADHD means that the person has very limited impulse control and often displays a short attention span, especially for tasks which fail to stimulate that person. For example, chores don’t get the attention they need but a stimulating activity like video games can be magnetic, absorbing hours of uncompromised attention, because they always deliver stimulation. I will not argue the validity of the diagnosis. I was diagnosed with ADHD in my twenties. I’ve known kids with and without ADHD and I can usually spot them easily and it’s a very real problem.

The best description for Asperger’s Syndrome that I’ve encountered, was by Dr Tony Attwood, and compares it to color blindness for social situations, or social blindness. Most people see constant rainbows of emotional color around them and they learn to read those moods and social interactions as easily as they learned speech or walking. Kids with ASD, can’t see those colors and therefore seem awkward when they can’t follow the flow of a conversation or form meaningful friendships.

Some kids eventually pick up enough social cues that they can navigate the social landscape through intellectual deduction, rather than organically following the ebb and flow of topics and interests. It’s like approaching a stop light if you are color blind and determining the color of the light by whether the other cars at the intersection are moving or remaining still. There are enough cues, like green is the bottom light, for some kids to follow the trail and get by with puzzle solving skills.

With these disabilities as a backdrop, adding a gifted accommodation seemed like just another formality.

Because the mandates for free appropriate public education (FAPE), frequently aren’t adequately funded, many schools are reluctant to provide accommodation unless parents persist in pursuing them. It’s almost like earning some great recognition for parents to say that they beat the system and secured accommodations that their child deserved to have in the first place. So, by the time Avner reached middle school, we thought of ourselves as masters over the system because we negotiated what our child needed. In a very limited way, we had won, while the system trained us to their expectations of what they would comfortably deliver.

Middle school is rough. High school is tougher, but so much of the turmoil of those years revolves around puberty and maturing bodies and brains. Avner’s first episode of hypersomnia happened in November of 2014. About the same time, he had started a new medication to help with sleep habits and to supplement his ADHD medication, Concerta.

It seemed so easy to explain the hypersomnia away by attributing it to the new medication. The medication was stopped and sleep seemed to become nearly normal. (The photo above was taken on the road trip during that first episode.) We had fallen into the trap of attributing cause and effect to Avner’s moving in and out of KLS episodes. It was a mistake that we would make several more times as the situation became more dire.

We bonded with the small teaching team in the International Baccalaureate prep program at Fairview Middle School. Writing was always a struggle for Avner, both the physical act and the process of organizing thoughts coherently. At one point during his first year of middle school, he was on the floor hiding under his desk in language arts class because of a midterm exam. His passion for science and math kept him going though, and he developed a love of the Chinese language.

As he entered puberty, Avner’s sleep habits changed. His behavior changed as well. He seemed to get lazier about all manner of things. He would occasionally return to being the kid we knew and loved, but we would joke that “the aliens took our son away and replaced him with the kind and thoughtful child.” Nothing seemed extraordinarily wrong, but Avner, who was always enthusiastic was becoming a difficult child. The biggest problem seemed to be waking in the morning for school.

The daily battles began slowly. It seemed innocent enough. On the one hand, we had a kid who seemed reluctant to wake up. On the other hand, we had busy lives and an expectation that Avner would attend school unless he contracted the plague of the week from some other child. That’s just how life works, we believed. We had also joked for years that Avner was pathologically healthy. He almost never contracted the colds, or infections of his peers. He would actually be the only kid in class who wasn’t ill.

We escalated our efforts to wake Avner. I’d use ice cubes to get him going. I’d yell. We badgered him to roll himself out of bed, and somehow this worked for a while, but the behavior kept getting more and more bizarre.

We also became accustomed to Avner falling asleep in strange places. If we went to dinner, he would fall asleep against Barbara. If we were in the car, he fell asleep on short trips of five or ten minutes across town.

The battle escalated on Avner’s side as well. Avner would regularly grab a pillow and blanket when he had trouble waking, and take them to the bathroom. He would lay against the bathroom door as a human door stop, so I couldn’t force him to get dressed and go to school.

I took a rather direct approach to the problem, by removing the door from its hinges. Everyone in the house was very unhappy. We were all angry and frustrated. We consulted with the psychologist who originally diagnosed Avner’s ADHD and autism. We tried incentives and consequences. Sometimes it worked for a few days, mostly it didn’t.

Some time during this period, we started finding odd things in the house. On one occasion, it appeared that an animal had entered the house and defecated on the carpet, but the pest control technician found no breeches for an animal large enough to leave the scat we found.

Avner hoarded dishwasher and laundry soap liquid tabs. They would disappear from their normal places. Dishes went missing during this period. We would find things under his bed or other furniture.

From time to time we would spot a food wrapper or silverware peeking out from under the bed in Avner’s room. This became the second battleground. We fought about hiding the nighttime feedings and all that went with it in his room. We fought about eating late at night. We argued about keeping the room clean. We fought and fought and the psychologist became more concerned that nothing we tried was working.

We started finding the soap pods, drained under the beds in Avner’s room and our guest room. Puddles of blue dye and soap would periodically show up, here and there. We begged. We pleaded. We punished the behavior, by restricting television and video games. It didn’t stop.

This had become our home life in Avner’s last year of middle school. We knew it wasn’t normal, but couldn’t imagine this was anything more than a behavioral problem.

I blamed myself. I had been struggling with my own health problems. Barbara would sometimes claim the problem was her parenting. I can’t speak for her, but I had a difficult time over a foot surgery that went badly. For many reasons, I took the role of family pillar in times of crisis and I had stumbled.

We wouldn’t blame each other, but as parents we both felt like we were somehow failing. We punished. We tried all the parenting advice from our therapists. We found behaviors to reward. We tried exchanging behaviors for privileges. Success came and went fleetingly.

Teens are difficult, we thought. We saw our friends’ kids grow up with varying degrees of success. We were convinced at the time, that we had done something wrong. It hadn’t yet occurred to us that the behavior and sleep could be a medical problem.