Everything Changes at Once

Home Kleine Levin Syndrome Everything Changes at Once 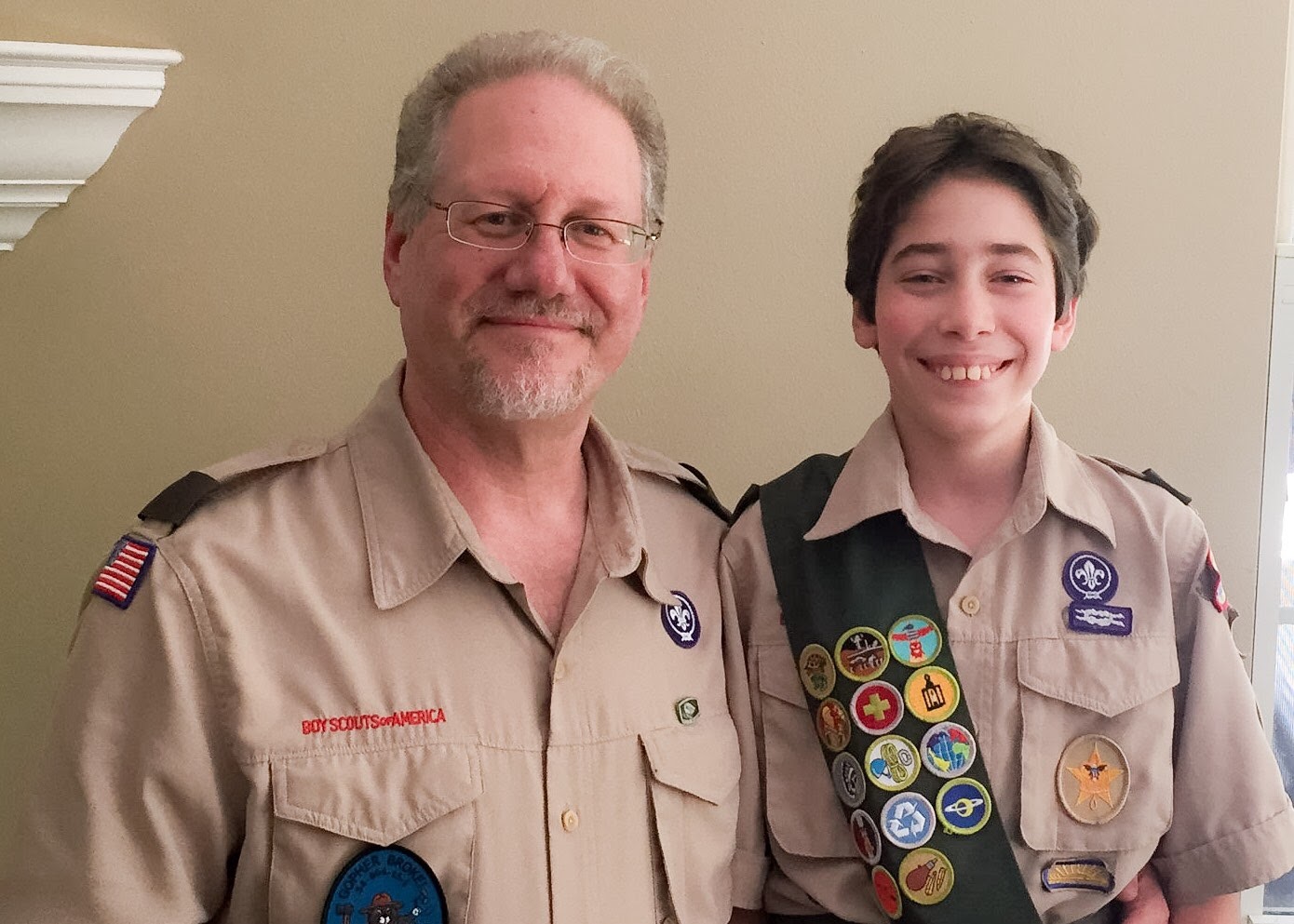 In 2015, Avner earned the rank of Star Scout. Avner and I also had the honor to both be tapped out for the Order of the Arrow (OA) at Wallwood Summer Camp as scout and Assistant Scoutmaster. OA is the Boy Scouts of America honor society.

Membership is granted only to scouts above First Class who have camped a total of 15 nights. OA stood near the top of Avner’s bucket list, since starting his scout career. My father is an Eagle Scout and earned the honor of Brotherhood in the OA. When asked, Avner would answer that he wanted to earn the rank of Eagle Scout with at least two palms and OA Brotherhood. Palms are awarded for earning merit badges beyond the minimum requirement and continuing to serve in leadership. My father earned two palms.

Avner served in troop leadership, meeting his big and small goals. Nothing was going to stop this kid. He wanted to earn as many honors as his grandfather had in scouting, if not more, and he was driven to get there.

Eighth grade started great. Avner came home from school and opened his books as soon as he got home and he cranked out homework as fast as he could. He finally figured out that he could have free time if the work was done. He was doing well in most of his classes. He really liked Mr. Mayer, his new history teacher, because he would dress up as historical figures and engage the class.

Avner had become a favorite of several instructors, especially Mrs. Chao, the Chinese instructor, and he started to show his work in algebra class, but that was still a bit of a struggle. He had decided to attend Lincoln High School to continue his Chinese studies. He was studying Chinese during the day and completing Hebrew at night, in preparation for his bar mitzvah.

In January of 2016, Avner began to change. He became secretive and withdrawn. He was very irritable. Suddenly, he went from struggling with English to struggling in most classes. We worried. We also assumed the cause was puberty.

Mr. Peck, the chorus instructor, began using Avner as a baritone and bass. Avner had been on growth hormone for some time. I was always tall and I stand over six feet. Around fourth grade, Avner began slipping into into the tenth percentile for growth. We found a local endocrine specialist who prescribed growth hormone. Now he was starting to grow a little on his own. He was just below an average adult height.

The kid who loved language, became very frustrated with our friend Barbara as his Hebrew instructor. Some nights would be wonderful. Other nights he could not concentrate. We thought that the synagogue might be too much distraction, so Barbara held lessons with Skype and even conducted lessons in our home. It helped having such a dedicated friend.

The lessons became more volatile. When pressed, he would run away and hide under the furniture. We were getting frustrated. We nearly cancelled the bar mitzvah ceremony several times. As parents, my wife, and I were distraught. We had saved for years, as Jewish parents often will, to host a nice reception for our families to celebrate the Bar Mitzvah with us.

At the same time, it became very difficult to wake Avner in the morning. With a host of other behaviors, hiding food under his bed, openly defying parental authority, and generally having a hair trigger temper, we were getting more frustrated all the time.

About the time we reached our limits on perseverance, Avner would have a wonderful day. He’d be friendly. He worked independently and finished his chores without being asked. He was the model child. My wife, Barbara and I joked that the aliens had abducted our child and left us a well behaved substitute.

Even though my measures had become extreme, we always managed to wake Avner for school. We hadn’t connected the sleep to the behavior except to believe that the sleep was part of his defiance. Essentially, we had the proverbial cart before the horse. Other strange things were happening but we had our hands full.

The wound on my foot had not healed. I was referred to a podiatrist who found an ossicle under my big toe. He referred me to another podiatrist for surgery. The working hypothesis was that I was hammering a hole in the bottom of my toe from the inside. It made as much sense as anything else at the time.

I met the other podiatrist. His team had great confidence in him and I thought I had a solution to the wound that didn’t heal. We scheduled foot surgery but the procedure wasn’t what I expected.

The first podiatrist explained that an incision would be made in the side of my toe, and the boney growth would be removed with a local anesthetic. On the day of the procedure, I was put into a twilight sleep and the incision was made through the open wound. This became a point of contention later. A few weeks later, as scheduled, the stitches were removed from my swollen toe, in time for the weekend. Ilooked very much forward to returning to my training schedule and finally getting back to my regular routine.

The following Sunday about half past seven, as the sun was setting, I took off my shoes to discover that my toe had dehisced, looking like a butterfly shrimp had sprouted on my foot. I never expected anything like that to happen. I called Barbara and we agreed that I needed to be seen as soon as I could.

I played phone tag with the doctor’s on call service. I was told that if I didn’t think it could wait, then I should go to the hospital for the emergency department. The problem was that late March in public schools was testing time. Avner had to get to bed on time and someone needed to stay with him.

I called Richard. His daughter’s sat with Avner in the past. I was hoping that maybe one of the girls or maybe Richard’s wife could sit with Avner and make sure he got to bed so that he didn’t have trouble getting to school on Monday morning.

Richard was very pragmatic about the situation. He said it was easier for him to take me to the hospital and for Barbara to stay home with Avner. Soon enough, I found myself in Richard’s car talking about one of our favorite topics, triathlons and training. Richard is about fifteen years my senior, so unsurprisingly, the topic drifted to the best way to soothe older muscles after a strenuous workout.

Richard had staked out his position in favor of ibuprofen. I had previously secured a prescription for naproxen sodium. I particularly like the prescription strength because you can’t just add a pill to  the over the counter dosage to reach a safe maximum. Frankly, after a four to six hour workout, I get a little achy. Bricks, cycling for several miles then going for a run for a few more miles, can push a forty to sixty year old body into post workout discomfort. The extra 60 mg of naproxen sodium in the prescription strength helps.

The discussion was as lively as we could manage in an exam room with me in a hospital bed. That’s when the athletic looking physician’s assistant entered the room. Clearly the hot topic was our post workout drug therapy and apparently more interesting than my foot, at least as far as the introductions were concerned.

She asked our sport and we told her that we were doing triathlons. She ran marathons. Richard was the runner, but I’m definitely not running unless you let me swim and bike first, except for training.

“Have you tried Mobic (Meloxicam)?” she asked us.  Neither of us had ever heard of it.

The heart of our issue boiled down to dosing schedules. Ibuprofen lasts only six to eight hours. Naproxen sodium lasts closer to ten to twelve hours per day. So, in practice  for sore muscles, one dose usually lasts long enough to carry me to bedtime and then I feel refreshed when I wake up. Meloxicam also belongs to the category of NSAIDs, like Naproxen and Ibuprofen. However, Meloxicam lasts a full 24 hours.

So, I learned that night that when you put three endurance athletes in a room together, the conversation will always drift to some aspect of endurance sport.

Eventually, the conversation turned to my toe. There was nothing that the PA could do for me, except pack the wound and show me how to manage the dressing until I could see my doctor. As I prepared to leave, I looked through the discharge papers and found a prescription for meloxicam. It surprised and amused me. I finally tried the Meloxicam. I still find that Naproxen works better for me, but I’ll never say that I never heard of or tried Meloxicam.