Stepping Through the Crisis

Home hospital Stepping Through the Crisis 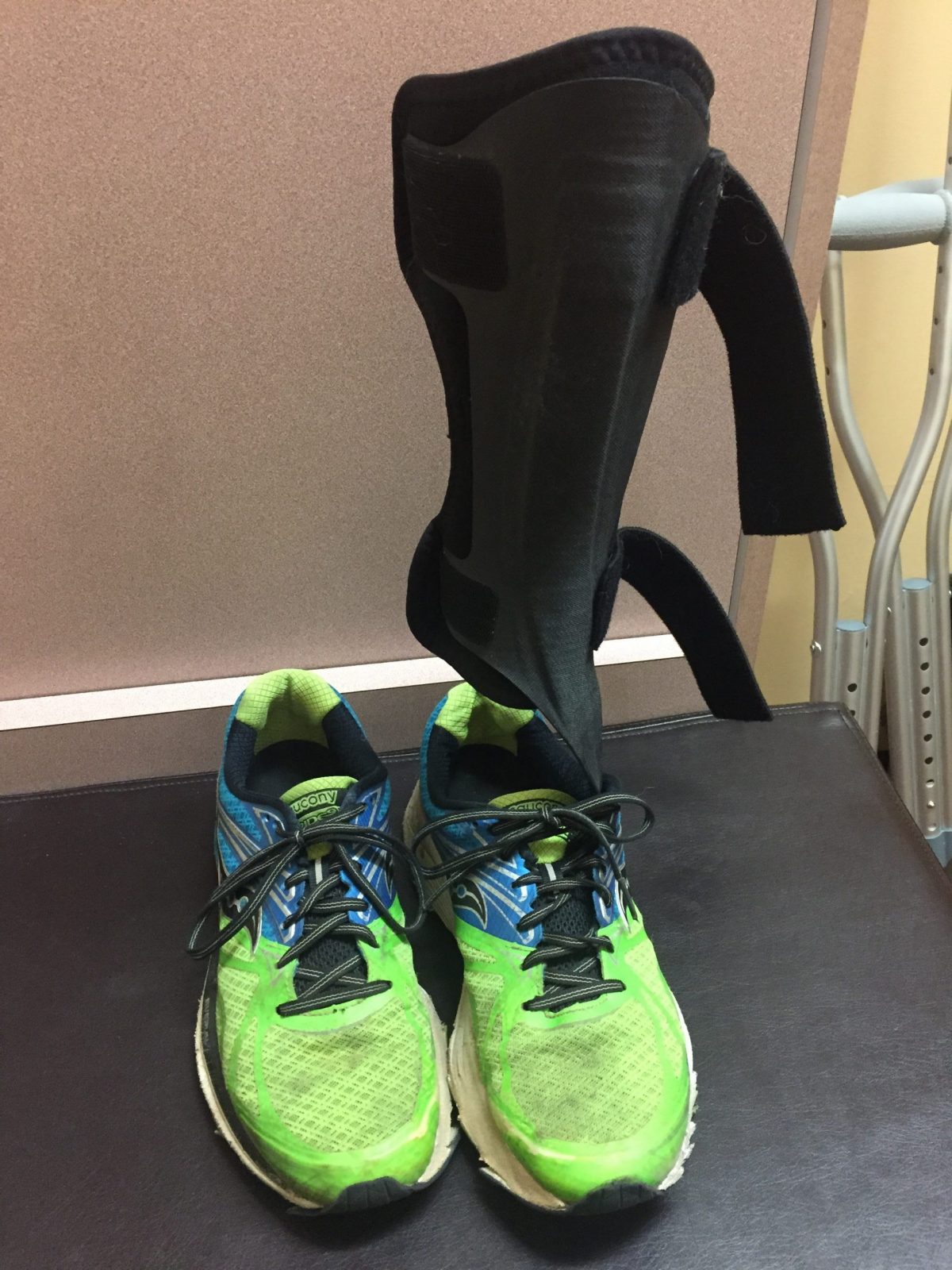 November of 2016, Barbara had to get Avner from our Scout camping trip after he took a fall in a ravine. He couldn’t move his left leg and reported no sensation. He had been seen in a South Georgia Emergency department and an X-Ray there, showed no immediate evidence of trauma.

Symptoms weren’t improving by the end of the weekend, when the doctor’s office opened on Monday. In fact, he developed drop foot, a symptom which alarmed us. His leg just hung from his body, showing no signs of life, except a pulse. We visited a spinal specialist for an expert opinion. He performed a physical exam and a basic pinprick assessment which also indicated a problem. An orthotic insert was ordered that fit in Avner’s shoe to manage the drop foot. The doctor also ordered an MRI.

While we waited for our next move, I reached out to a client for a kid sized wheelchair. Life wasn’t normal, but with everything else going on, we wanted to maintain as much of the regular schedule as possible, until we had some answers.

Avner had also been singing with the school chorus since elementary school. In high school, at the age of 13, he was already singing bass. I’m biased as a parent, but I think he has a wonderful voice. It was almost like one day, I called home and this man with a deep voice answered the phone. It felt like his voice dropped that suddenly. So, after days of doctors and getting a wheelchair, we delivered Avner to the concert in Cascades Park, wearing his tuxedo. He was wheeled to the front of the Men’s section, where he could be easily wheeled on and off stage between musical selections. He performed well, considering the changes in circumstances.

In fact, he was having a good week overall. He struggled to get to classes with his physical impediment but  Barbara and I had remarked that most of the troubling behavior seemed to disappear for those few days.

The MRI results came back, which showed some trauma, possibly consistent with a dislocated hip, but nothing that explained the paralysis. The spinal orthopedic specialist suggested that our next step was an in-patient visit to hospital where he could be seen by a neurologist.

I frequently tell people that Tallahassee is big enough to have access to most resources that a bigger city can provide but we don’t always have a selection. As far as I know, there is one pediatric neurologist in our city. There are two pediatric psychiatrists and both are older and not actively seeking new patients. In this case, the local neurologist came with a poor reputation from some friends in the local medical community. One friend had told me that the local neurologist, “couldn’t diagnose epilepsy even if the kid was seizing right in front of him.”

With few options, we hoped for the best. Avner was checked into a room on the children’s floor. Barbara and I were identified and notes were made that allowed both of us to visit. The pediatric patients were behind an electronic security door and all visitors had to be screened before being allowed through the door into the children’s ward.

Dr Ayala, the neurologist, stopped by the room to examine Avner. He said that he wanted to observe Avner overnight before doing any additional testing.

Avner’s best friend, Kimi, came to visit after school. Kimi and Avner have been friends since third grade. She’s been his “partner in crime,” confidant and big sister. When she had trouble in middle school, Avner saw the change in his friend and arranged for everyone in chorus and her other friends to sign a card and surprise her with it in chorus class. They’ve propped each other up through whatever they faced. As parents, we love that she doesn’t take any of his crap. She will call him on the mat and he’ll frequently listen to her before he listens to anyone else. Hearing her voice in our home is usually lift to all of our spirits.

Eventually everyone said their good-byes and we left Avner in the hospital for the overnight observation.

Avner had a history of tossing and turning in his sleep. It was not unusual to tuck him into bed, when he was younger, sometimes even to stay with him until he fell asleep, and to find him the following morning turned 180º, with his head at the foot of the bed.

So, when we heard from Dr. Ayala the next day that he had observed Avner’s leg moving in his sleep during the night, we were relieved. He wanted to run a nerve conduction test, but felt strongly that Avner had a conversion disorder. In planer terms, the paralysis was psychosomatic.

Avner received a visiting therapy dog in his hospital room with smiles and petting. With our permission the dog climbed into Avner’s hospital bed and basked in his attention. It helped to calm us as parents, probably more than it helped Avner as we waited for the discharge papers. Ten days had passed from the initial fall at Kolomoki Mounds.

Avner showed no signs of pain as the probes were inserted or when the electrodes were activated during the nerve conduction test, but data showed no signs of nerve damage or impairment. We accepted the diagnosis and left the doctor’s office.

Barbara had befriended a cookbook author and food ethnologist on Twitter for a couple years. Michael Twitty uses the handle @KosherSoul. He’s a scholar of Judaism and African and African American cuisine and cultures. He’s also an animated speaker and a good story teller. Today his books win prestigious awards and he has earned a lot of notoriety.

For well over a year, Barbara lobbied to have Michael come to our synagogue as a visiting scholar to talk about traditional Jewish foods and culture. Of course, the visit was scheduled in the midst of our personal crisis and Avner’s paralysis.

The first night of his visit, Barbara’s friend Debbie, hosted dinner at her home with her husband Mario and their kids. The conversation was very animated and Michael shared some stories about speaking to Jewish groups and some of the experiences he had and observed as a black man and being Jewish by choice. He told one story in particular about a group that had invited him to speak about American Jewish culture and cuisine in the Deep South, expecting to hear tales of the struggles to get kosher foods and their great disappointment when he told them that many Southern Jews simply didn’t keep kosher.

Coming from a Southern Jewish family myself, raised on shellfish and pork bacon, I found great humor and truth in his reply to those disappointed synagogue ladies and the story. I shared some of my relevant family history and Barbara, Debbie and Michael exchanged recipes and more history of food. It was a lovely intimate evening.

The visiting scholar weekend included a congregational Shabbat dinner the next evening. Barbara picked Michael up from his hotel and Avner rode in the back seat. Apparently, he was  engrossed in the conversation. When Barbara got to the synagogue, she parked in front of the synagogue door and Avner stepped out, without his crutches. The next day would have been two full weeks since the fall in the ravine.

Barbara told Michael that if she wasn’t so relieved to see him walk, she’d be furious. Avner had taken only a few steps before realizing that he didn’t have support. He stopped not being able to consciously continue walking, yet. He would be walking again on his own within a couple weeks.

Of course, the meal was excellent with tzimmes, apple kugel, collards,sweet potato salad, a black eyed pea hummus and featuring a main course of Carolina mustard chicken. Michael explained the Germanic origin of braids in the traditional loaf of challah. The congregation ate it all up, the food and the story telling.

The following evening for havdalah, Barbara made an impression with her turkey pastrami that Michail used for his Kosher Soul rolls at the synagogue. Everyone loves to eat well and no one was disappointed by Michael or the delicious food.

Barbara and I took great comfort that Avner was starting to walk again. For a little while, it seemed like things might be getting better.