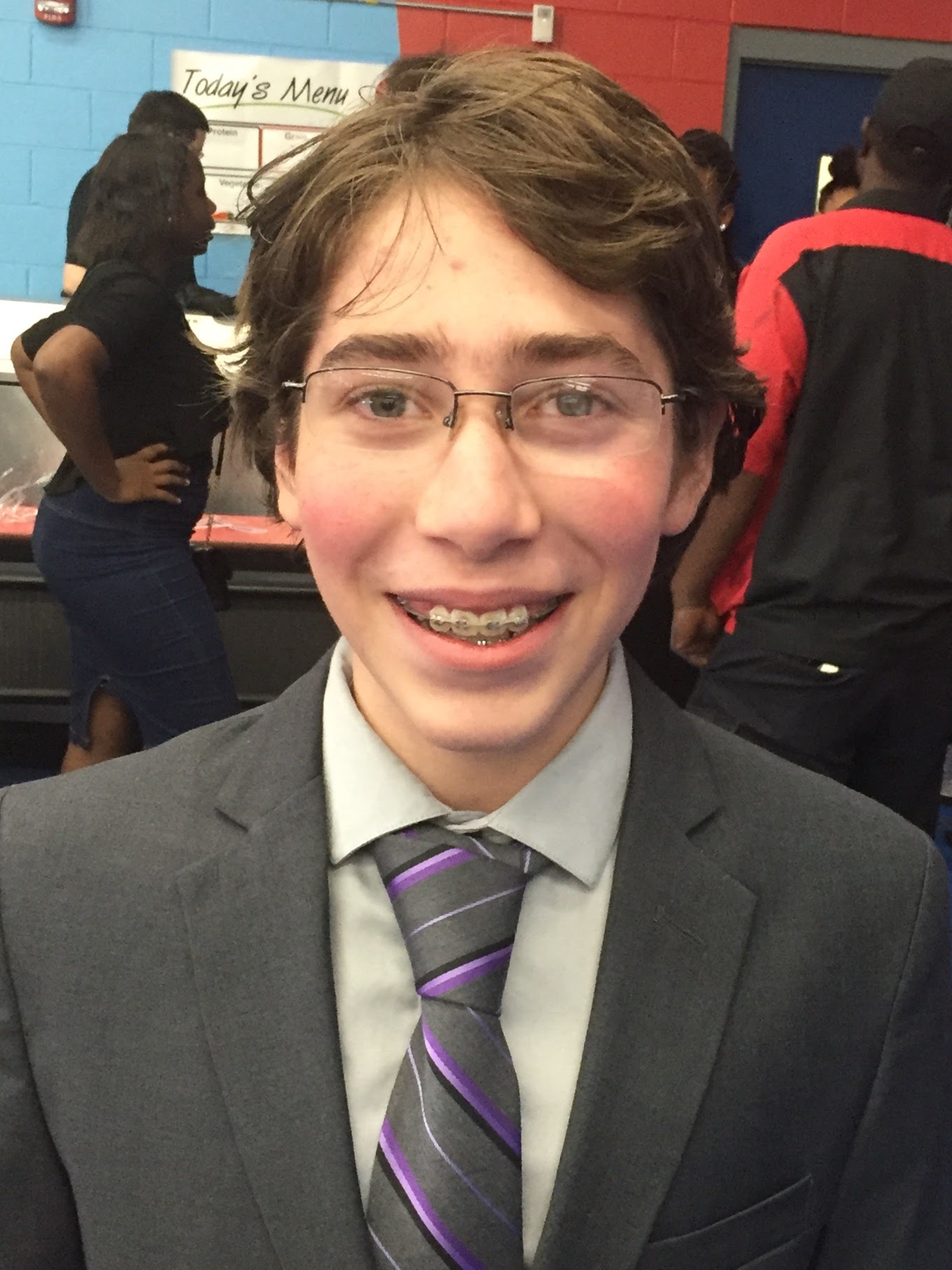 In March of 2016, Avner turned 13 and had his bar mitzvah in our little synagogue. He led the service with ease. It stood in stark contrast to the last couple months of Hebrew School lessons, where he would shut down and refuse to participate. We had assumed it was a combination of teenage hormones and autism spectrum behaviors.

In retrospect, we should have suspected something more serious. However, we were hearing some real horror stories from friends and their kids who had made bad choices as teens. We figured this was a parenting crisis and nothing more. If we stayed the course, provided positive discipline and rewarded effort, that Avner would come out the other side successfully. After all, we knew where he was, day and night. We ate meals together. His friends were really good kids. In other words, we were not in the risk group for a “troubled teen” we thought.

Still the attitude grew darker. Avner gravitated to violent video games. In fact he had migrated away from the social games that he played with friends at school. He was turning morose and there wasn’t a ready explanation, except adolescents. Everything that we thought we saw could be explained by teenage hormones or frustration with school work.

We hired a tutor. He refused to cooperate with her. Frankly, I found her to be pedantic. Avner had always had trouble with writing. I figured that like many skills which daunted him, he would figure it out and exceed our expectations. I was right on that account but my timing was way off base.

For example, he would not learn to ride his bicycle until the age of 9. He’d had a bike from the age of 5 but he steadfastly refused to take the training wheels off. Barbara had all but given up on the bike. I researched teaching how to teach autistic kids to ride a bike. I made it as non-threatening as could and followed some very sage advice. We went step by step, with a timer because he knew I wouldn’t keep him any longer than we planned. He learned to ride mid week.  The next weekend he and I rode 15 miles, at his insistence. I figured writing would be the same.

By 8th grade, writing became a key concern. If we scribed for him (he dictated and we typed), he could complete  assignments. It was like performing  surgery on yourself with a rusty spoon. By contrast, if you presented the stream of consciousness text to him, he could edit like an artist. Related sentences were gathered from the assembly of pages into paragraphs. He could see where he needed to expound with more details. He changed words for better context. He just couldn’t face a blank sheet of paper. We subsequently learned that we could have fought for a scribe as an accommodation on his IEP, but we didn’t know.

Now the assignments required that skill and he was utterly lost. English class was turning into a disaster. History was on a crash course with an overdue essay assignment. He couldn’t or wouldn’t produce the work.

He had a laptop computer for school. We had limited many features, trusting, but wanting to be cautious. We didn’t allow the system to load and install software without our permission. Being server administrators, we thought that we had the computer secured.

Even before the bar mitzvah, we turned off the tv. I actually pulled the cord from the back of the tv set and hid it in our closet. We did the same with the game system. I like my electronics but when I say the tv, I mean the tv. It’s my own idiosyncrasy. We watch tv together in the common room or we don’t watch. I don’t want to create an environment where as parents we seclude ourselves so that we don’t know what’s happening in our child’s life.

I brought my laptop into the living room to do my work. The idea was that Avner could have friends come over, or he could go out or basically, just enjoy spring break, when the assignment was completed. In the (hopefully short) meantime, we would work side by side. I would be there to help in any way he needed.

I prompted him for study materials. I helped him find quotes. I did everything that I knew how to do except write the essay for him. Spring break came and went and the only difference was that he no longer needed bar mitzvah classes.

Near the end of the break, I caught him playing an online video game. It was violent, and cruel and I became very concerned but I also became very angry. I didn’t know what to do next. There were no more privileges to take away. Except for school, he went nowhere without us. At the same time, Avner was dropped from the program that supplied his prescription growth hormone. I was trying to manage two crises at the same time. Avner’s school work was slipping and we couldn’t get one of his medications.

Avner barely grew between third and sixth grades. He wore many of the same clothes all three years. I stand over 6 feet tall. Barbara is a little taller than average, there was no reason to explain why Avner had lagged. Fortunately, we have an excellent endocrinologist in town. Indeed, Avner was hovering around the 10th percentile for height. With the growth hormone, we managed to push that up close to the 30th percentile. However, health insurance would only cover the cost if Avner dropped below the 3rd percentile. We felt it was ridiculous, I still do. Our doctor managed to get Avner enrolled in a program that managed our health insurance appeals and provided medication while we were in process.

After our appeals were exhausted, we learned that the magic of puberty was providing Avner with a little extra growth hormone of his own. He will never reach my height but between nature and scientific nurture, he’s no longer the smallest scout in the troop, and he stands a little taller than most of the women we know.

Puberty provided more than a little growth though. We would later learn these were episodes of Kleine Levin Syndrome, but at the time, we thought it was a behavioral problem. We started to seek out therapists. Barbara found a social worker who worked with autistic kids and adolescents. Avner’s behavior and our inability to find a solution was causing tension in our marriage. The counselor, after several sessions, suggested that the problem could be that Barbara and I were divided on our approach to parenting and we needed to attend to our issues first.

Meanwhile, Avner’s grades were showing no improvement. We called urgent IEP and teacher conferences to find out what was happening in the classrooms. The teachers were mostly excellent. The chorus teach who had known Avner all through middle school noted the change in personality. He was young and enthusiastic and didn’t have the experience to offer much advice, but it was good confirmation that the problem extended beyond home and others who knew him, could see it.

As luck would have it, Avner had already earned all the credits he needed to graduate to high school. He could do nothing for the remainder of the semester and still pass. It took a little pressure off of us as parents, but it wasn’t the desired outcome. However, it raised another problem for us. We had never seen Avner’s high school enrollment paperwork. He needed to select a schedule and he never brought the form home. He was barely functioning.

About the same time, even with some extreme measures, shaking the bed. Yelling that it was time to get up,  even using an ice cube to get him going, he would still miss the first period of school.

The kid that used to run or swim with me before class, was now frequently tardy. He’d forget his books or other things he needed in class. It seemed like I was always running across town to his school to deliver him or something for him. He was also frequently calling home to be picked up early. He had headaches or felt like he was ill.

High school starts at 7:30 am. That was one of our first concerns. We had heard that the county was experimenting with a 7th period. Ms Goad said that as part of Avner’s transition, Avner could start school in 2nd period. We created a schedule that played to his strengths and gave him room to work on the other areas. He had honors chemistry, geometry and Chinese 3. He also registered for a study skills class, and a general English course, as a “Falcon Singer” in Mr Peck’s advanced chorus, he also secured a spot in the Lincoln High chorus.

Mission accomplished, we thought. Avner would be promoted out of middle school. He would get his advanced classes and we could relax for a few months over the summer. The next year could start with a fresh slate.